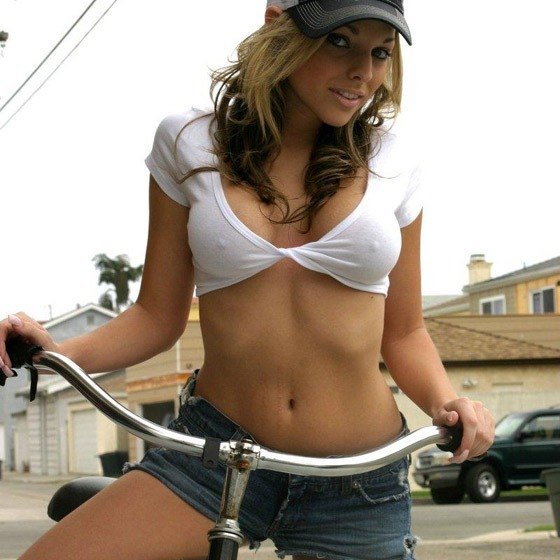 Cycling and Your Health

Even if as an adult, you haven't ridden for years, get on a bike and it all comes back to you.

It's so enjoyable and great exercise.

You get outdoors and get a great upper and lower body workout. You can ride by yourself for some serious "alone" time or with a group for some nice social interaction. I've got some tips further down for both solitary and group riding, but first we'll take a look at the different types of bicycle available and which type might be best for you.

Road Bike for Health and Fitness 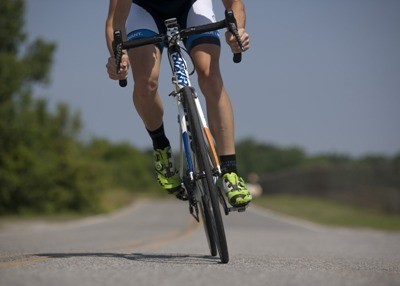 The road bike is for the serious rider.

As the name suggests, they are designed to be ridden on the road or a similar smooth surface.

They have narrow wheels with smooth tires attached, a light-weight frame that has progressed over the years from steel to aluminium to carbon fiber and titanium and narrow racing saddles.

They have multiple gears that enable the road bike rider to attain high speeds on flat surfaces and to climb hills relatively easily. They are the bikes you see in competitions such as the Tour de France and in the groups of lycra clad cyclists out and about on the roads.

Road bikes usually have what are called clipless pedals. These are pedals that attach to cleats on the rider's shoes. The rider pushes his or her shoes onto the pedals to lock them in place and twists and pulls to remove them. Their are two main advantages:

The disadvantage, of course, is that if you stall on a hill, you don't have time to uncleat and when you fall, the bike falls on top of you.

Road bikes have dual handlebars that allow you to grip the hoods when you are coasting along or climbing in a more upright position or to grip the drops to reduce wind resistance when you're sprinting. I'll explain these two terms (hoods and drops) later.

Also, we look at how to choose a road bike and its equipment available further on in this article.

Fitness With A Hint Of Danger: The Mountain Bike 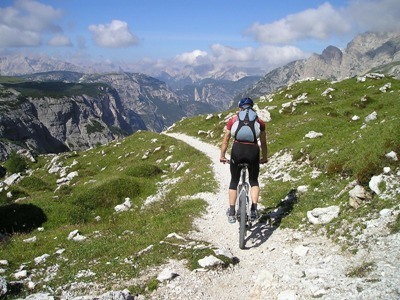 Mountain bikes are designed to be ridden over rough terrain.

They are heavier than road bikes with a shorter distance between the saddle and handlebars. This helps the rider jump over obstacles such as logs or rocks by pulling the front wheel up followed by the rear wheel as the front wheel lands. The frame is usually rigid steel or aluminum.

The tires are thick and knobbly, designed to minimize slipping on rough surfaces. However, they do handle slipping and skidding much better than road bikes because of the extra rubber on the surface.

Mountain bikes usually have more gears than road bikes, particularly in the low range, so that it's easier to climb steep slopes that go on forever. It still helps to have strong legs though!

Cycling for Health: The Hybrid Bicycle 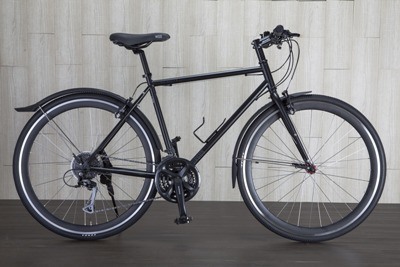 As you might guess from the name, the hybrid bicycle is a compromise between the road bike and the mountain bike.

As such, it can be an excellent choice for someone who just wants to get around and enjoy the scenery while maintaining a level of cycling health and fitness. Lycra optional.

The hybrid bike is also closest to what most of us rode as kids. Though they weren't called that back then. They were just called bicycles.

A hybrid usually has flat handlebars for a more upright riding position, a wider gear range than a road bike, a broader saddle and frequently comfort extras such as mudguards. 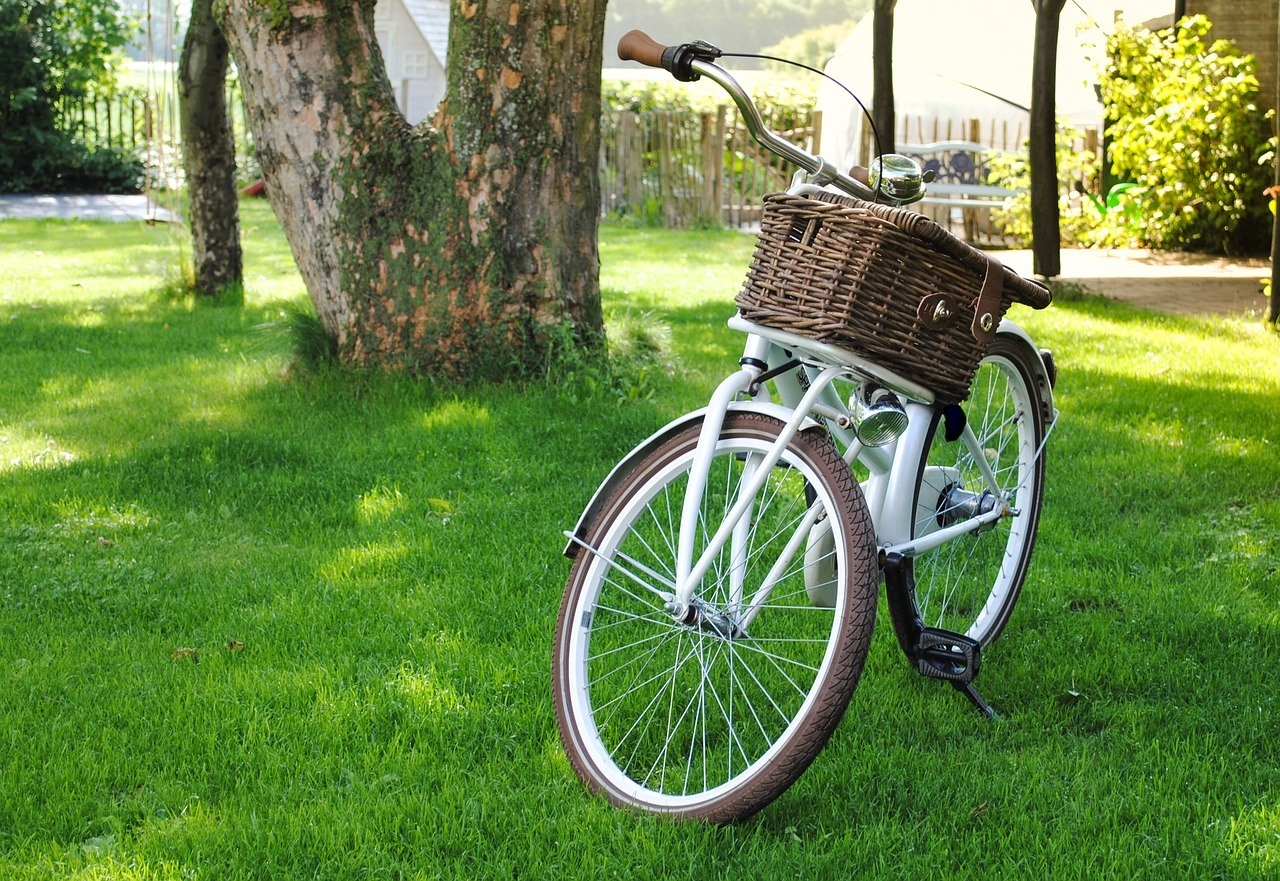 The retro bike appeals to those with a nostalgic bent and pays homage to a bicycle style popular in the 1950's.

It has wider than usual handlebars, a strong, heavy frame, mudguards and thick, puncture resistant tyres.

It's often dressed up with a carry basket in the front and sometimes a rear parcel shelf.

But its most distinctive feature is the absence of a cross bar that you have to lift your leg over. Instead, the bar is angled down and welded to the saddle bar nearer the pedals. Often it is curved and also welded at its mid-point to the diagonal bar. This makes it easier to mount and dismount and was originally for female cyclists wearing dresses.

Because of their heavy weight, retro bikes can give you great cycling for your health, providing an excellent fitness workout. 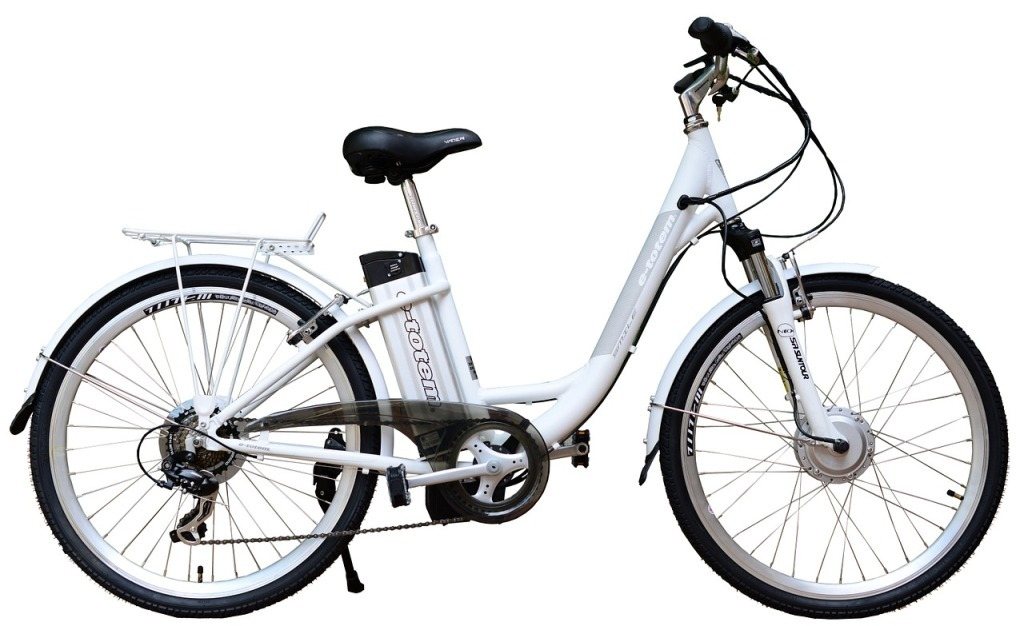 E-bikes are a comparatively recent phenomenon, with their availability and popularity fuelled by enormous advances in battery technology over the past few years.

As you can see from the image above, the battery is attached to the rear of the saddle bar and the bike design is what you might call "modern retro", with the flat handlebars, step-over frame, mudguards and rear parcel shelf being retro and the gears, brakes and internal cabling being thoroughly modern.

Not to mention the electric motor and its battery, of course!

Some dedicated cyclists sneer at e-bikes, but I totally disagree. Anything that gets more people riding more often is a plus. Frequently, the people who are riding electric would otherwise not be riding at all.

What a lot of people don't realize is that most e-bikes are designed to help (by cutting in the electric motor) only when you're pedalling and so the rider is definitely getting some exercise. Not the full cycling for your health benefit perhaps but infinitely better than nothing.

By using both pedal power and electrics, an e-bike can provide a range of more than 100 km on a single charge! 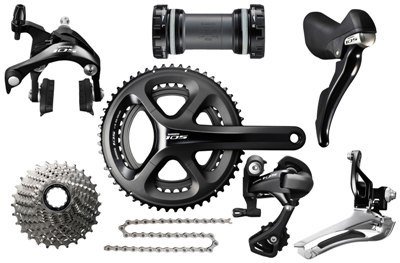 If you are buying a road bike, the most important consideration after the frame size and material is the groupset.

The groupset comprises all the mechanical or electronic parts that are involved in braking, changing gear, or the running of the drivetrain. In other words, everything that makes it go or stop.

It is a key determining factor in working out whether the bike in front of you offers good value for money or not.

A detailed examination of groupsets is beyond the scope of this article, so I will cover them, along with the other two really important components, wheels and saddle, in a future series of articles.

In the meantime, if you are just starting out with your first road bike and just want a good, reliable groupset that doesn't cost the earth, it's hard to go past Shimano's middle of the range 105. It fits between Tiagra and Ultegra. 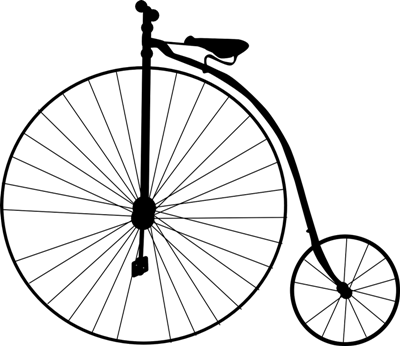 Popular from 1870 to 1880, the penny farthing (so called because the disproportionate sizes of its front and rear wheel reminded people of the largest and smallest English coins, the penny and the farthing) must have provided a real workout.

It was the first two wheeler to be called a bicycle and was popular as a means of transportation as well as a fashion item.

But it certainly also provided for the first time the concept of cycling for your health and is the ancestor of all modern bicycles. The large front wheel gave the penny farthing a high speed (especially downhill, which must have been quite frightening). This was superseded by the concept of gearing between two same sized wheels.

About the author Phil Lancaster

Check Out Our Latest Articles